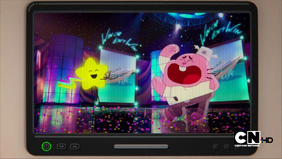 Win or Don't Win is a game show in The Amazing World of Gumball. It was first seen in "The Helmet." It is hosted by the shooting star. According to the game Water Sons, it is the most popular game show in Elmore.

The gist of the game is demonstrated in "The Extras." Following a brief lull after the game commences, the contestant either wins or (presumably) loses. There is seemingly no determining factor to the outcome.

Retrieved from "https://theamazingworldofgumball.fandom.com/wiki/Win_or_Don%27t_Win?oldid=568816"
Community content is available under CC-BY-SA unless otherwise noted.