The Amazing World of Gumball Wiki
Register
Don't have an account?
Sign In
Advertisement
in: Characters, Minor Characters, Male,
and 3 more
English

Wilson Bilson is a minor character in The Amazing World of Gumball. He makes his first appearance in "The Others."

Wilson is a paper cutout of a drawing on lined paper. He has spiky hair and a muscular upper body. He also wears a skirt, heels and a majorette hat, as well as runny mascara. Each part of his body appears to be drawn in a different style.

Each section of his body reflects a different aspect of his personality. The first one is a cheerleader personality, the second one is a goth personality similar to Carrie, the third one is a football player, and the final one is a majorette.

He is very close friends with Clare, who refers to him as her "only true friend." Despite the conflicting feelings shown by his numerous personalities, in the end, he is truly saddened by her departure. 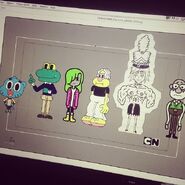 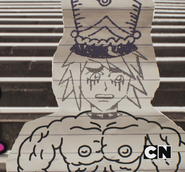