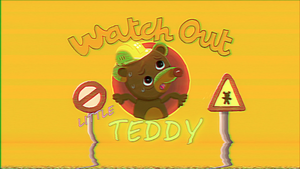 Watch Out Little Teddy is a safety video that appears in "The Safety." It revolves around Little Teddy, an accident-prone bear who is repeatedly injured and subsequently reprimanded by the narrator. The video's disturbing and unsettling nature frightens Mr. Small and everyone else in Miss Simian's classroom, but no one is more scared than Darwin.

Retrieved from "https://theamazingworldofgumball.fandom.com/wiki/Watch_Out_Little_Teddy?oldid=506568"
Community content is available under CC-BY-SA unless otherwise noted.