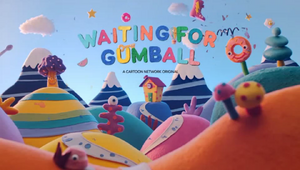 Waiting for Gumball is a series of thirteen shorts based on The Amazing World of Gumball, or more specifically, "The Puppets." It revolves around the adventures of Gumball and Darwin in the puppet world, and Grady, Frank, and Howdy looking for things to do while waiting for their masters. The shorts were released on the American Cartoon Network website on October 8th, 2017.

Gumball and Darwin come across a bowl of weird purple food while walking around. Gumball says he has seen it before in his dreams and eats it. Darwin asks him if any weird side effects happened, but Gumball just shrugs it off.

Gumball thinks he is allergic to himself and accidentally sneezes his mouth onto a pineapple. The pineapple is just about to start singing when Darwin tears his mouth off and puts it onto Gumball. The pineapple says this was the best day of his life and Gumball and Darwin ask each other if they heard anything.

Gumball makes Darwin mad because of his puppet's voice so Darwin gives Gumball the taste of his own medicine.

Darwin accidentally imagines a beard on himself so Gumball helps.

Darwin imagines a gnome while Gumball tries to imagine something else, but fails and keeps imagining gnomes as well.

"Cool to be Felt"

Darwin and Gumball feel each other and describe it.

Grady wants his friends to help him clean the house when they are playing video games.

Grady lost his precious spoon and Frank is the one who has it. Thinking it is a balloon, he refuses to give it to Grady so they have a dance battle for it. The winner of the spoon is Keyboard Dog. Angered, Grady breaks the spoon. Frank then shows him his collection of spoons to cheer him up.

Frank is bored so he keeps annoying Grady and Howdy. After their failed attempts to entertain Frank, he realizes the word he wanted to say is not bored, but sleepy. Grady and Howdy tell him to go to sleep and he falls on the floor sleeping.

"Cool to be Felt"

"Grump"
Add a photo to this gallery

Retrieved from "https://theamazingworldofgumball.fandom.com/wiki/Waiting_for_Gumball?oldid=541845"
Community content is available under CC-BY-SA unless otherwise noted.