Hey hey hey, it's another Thursday! Yes, it's that time of the week when I spend a lot of time writing words about some musical words and then pretend that people care. Well, if anyone does, this time I'll be counting down my five favorite songs of the third season!

For me, season three is where the show really changed. I remember thinking that this is not the same show after viewing the first episode. At first I wasn't satisfied with this "change," but later I realized that I love it. Oh, this is also where the songs got so much better than before! Finding five favorites was hard here, but I hope I'll manage. So, without furder ado... 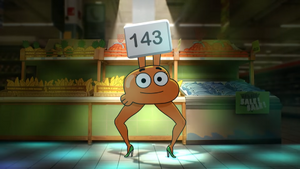 This is certainly not the first one that comes to mind when you think of season three, but to me, it's got that odd charm that makes it very lovable. The vocal performance is amazing and I gotta say that the music is pretty catchy as well. It kinda reminds me of "I Need a Hero" for some reason (and I really like that song). It sounds unusually motivational and a bit tense, it really fits the scene. It's The Best! 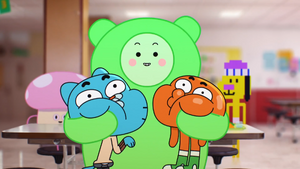 I'll cut to the chase here and say that this is one of the best performed songs in the entire show. I just love how Green Bear sings, his vocal range is amazing and the power in his voice is unbelievable. Other than that, the song is also pretty catchy and I like the instrumental. But yeah, it's mostly on this list because of the singer. Gosh, he's astonishing!

"Life Can Make You Smile" 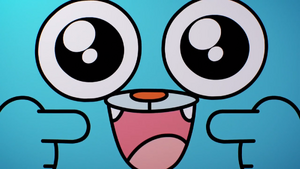 I've seen this as the number one song of the whole show in some lists, and while I can't really say I agree with that, the song certainly is good. It's purposely made to be catchy and it is catchy. If I'm not mistaken, it's a parody of "Happy" and I think it does a great job at imitating it while also sounding completely original - that's what I want to achieve when writing songs. I also love how Gumball gets more and more insane as the song progresses, it's not something that I see so often and it really amuses me. This is a pretty well-written and solidly sung song that is sure to make it to anyone's list.

Okay, who do we have here? 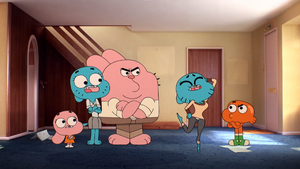 Season three's final episode is really a gem and so is this song. It's catchy, well sung, the lyrics are funny...I really like Gumball's creativity and the chemistry between him and his hopeless family members. Anais is just the cherry on top with her cynicism about "Imaginate" not being a real word and self-disappointment when she ends up saying it. It's a very fun song that, in my opinion, really deserves the spot it has here.

Once again, I'm stalling the whole thing by mentioning some more songs that didn't make it to the list, but could've if it weren't for some other songs. These are:

Finally, we're approaching the end. Which song is number one? 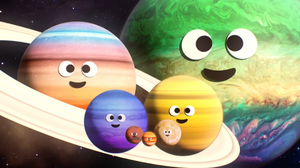 Say what you want about this one, but you can't deny that it's genius. A song that, as a YouTube comment pointed out, sounds both cheerful and depressing at the same time is one of my favorite types..of songs..The melody is so catchy that no one can resist it, while the lyrics make you feel so worthless that you'd actually laugh. The planets are also great singers. I love this bit of the episode and I think it's amazing.

Congrats, you made it to the end again!
Once again, I'd like to hear your opinion on these songs or maybe even get your top 5 list in the comments. Tips for better writing are still something that I need so they're very welcome!
Next Thursday, I hope I'll be able to finish the analysis of season four's songs. Until then, zoopity boopity bye!

I did this same thing with seasons one and two so feel free to check it out.

Retrieved from "https://theamazingworldofgumball.fandom.com/wiki/User_blog:MarvinDarwin/Top_5_Songs_of_Season_Three?oldid=518681"
Community content is available under CC-BY-SA unless otherwise noted.