It's a little depressing that this is the penultimate blog post in this song reviewing series. School is so close which means that post-holiday sadness is kicking in yaaay. Well, yeah, you know the title, you know what will happen so let's not keep you waiting if you're here to actually read the blog and not leave an unrelated comment to get a badge.

Season six has had lots of great episodes and I really fancy it. More importantly, I'll say it with 100% certainty: season six songs were the best of the entire show! I'm serious because I was thinking about this list even before I started reviewing season one's entries. The troubles when picking only 5 songs here were real! I think I have more honorable mentions than ever! Without further ado, let's see what I managed to do! Ayy, that rhymed!

My number five pick is:

"I Still Look Forward To" 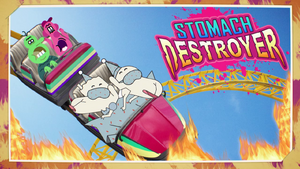 I bet you didn't see this one coming. You probably don't even remember it that well, but to me, it's such a sweet and memorable song that I catch myself singing more often than I'd expect. I think it could actually be pretty high on the list, but its competition is so great that I had to put it in this position. However, that doesn't mean it's any less good. It's such a simple and nice song that doesn't want to stand out by some extraordinary vocal performance or extremely complicated melody that wows you. It wants to be cute and simple, it is cute and simple - I love it!

Number four is something that caused some mixed opinions...

"If It's Too Hard To Forgive" 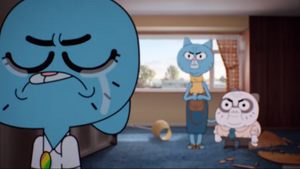 Yeah, yeah, I know, "The Parents" wasn't that good of an episode. Yes, I also know that this song was killed by Gumball's last line in the episode, but I think that's irrelevant now since we're looking at the song only. Surprise, surprise, I love it! It's another one of those songs that aren't too complicated, but serve as a great "cheapest, dirtiest kind of emotional manipulation." At times, it even reminds me of some elevator music or something my mom could hear in a café (me as well, but I would just drink peach juice or something). I don't have a habit of getting too much into details and using some professional musical terms mostly because I'm afraid I might misuse them and my teacher might find out but I'd just like to say that I adore the chord progressions in this song. There's also no doubt that Gumball is a great singer and he managed to deliver this song with his smooth and soft performance perfectly. Bravo!

After some chill and soft songs, time to progress onto something more cheerful. Can you guess what number three is? 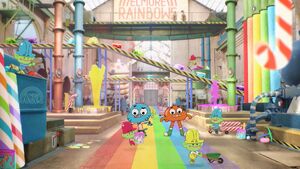 Whoever knows me well knows that I'm a huge fan of musicals and most, if not every musical parody is bound to be a hit in my book. If I'm not mistaken, this is the song they had to record a big band number for. And you bet they're proud of it, it appears four times in the episode! I can't blame them, though, it's really cheerful, fun, catchy, sweet, but also pretty funny. Songs that start off cheerful, but slowly descend into sadness are something I like and I'd expect it from Gumball. I like how at the end, everything is cheerful again, so the episode, unlike what the show usually does, ends on a joyful note. I think the song is a parody of Supercalifragilisticexpialidocious, it kinda reminds me of it and you can't change my mind! (Mary Poppins is great, by the way). Congrats to everyone who worked on this masterpiece!

P.S: Darwin saying "aks" instead of "ask" is something that happens a lot and it kinda annoys me at times, but it fits perfectly here!

Number two is another song that is so silly it works. What is it? 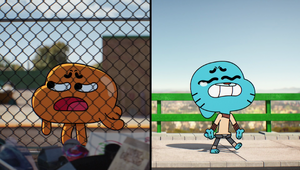 As I said, this one is pretty silly. The idea of creating a mess by making the characters actually sing out of sync, as the name of the song suggests, surprisingly works. Not to mention that even without this gag, the song would've been a success. Both actors are amazing singers and they deliver the song perfectly, even when they're "out of tune." An especially nice thing one YouTube comment pointed out is how well Gumball sang the line "my throat's gone dry," I think that's a nice detail. It's a cute song that manages to be both funny and emotional at the same time. Oh, also the ending is perfect, I adore the chords! I think this is one of the songs that could give a stranger a basic idea of what this show is like and that's nothing but admirable! Great work!

Yup, there will be quite a lot of these this time since making up my mind was so hard. They are:

Here we are, who'd have thunk it! I think it's pretty easy to guess what my number one pick is, but still, for dramatic effect...it iiiiiiiissss... 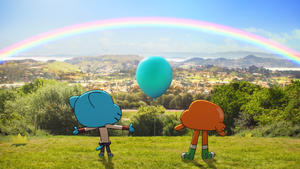 I didn't want this to happen. I really didn't. I didn't want to be this predictable, especially because at first, I didn't like this song at all. I thought it was overrated. I'll spare you the yadda yaddaing and just quickly explain why I disliked it. I thought that it uses age as a solution to some actual problems and basically says that you shouldn't worry about real problems because you're a kid. You won't be a kid forever, though, what then? Growing up hurts :c Recently, my attitude towards this piece has changed. A very similar thing happened as with my number one pick on this list. I listened to the song after a while...and cried. I absolutely adore it, okay, I have to admit that!! Any song that makes me cry is bound to be a total favorite, I can't deny that. Especially because not a lot of songs make me cry. This one, in fact, made me cry multiple times, even when I tried my hardest not to weep. I can't resist its perfectness! Its melody is sweet and the lyrics are just beautiful. Life sucks, it will kick you as hard as it can, but you have to stay strong and try to find the good in it. All the great memories you have should help you not want to give up on it because more of them are bound to happen. "If you stop halfway up the mountain, you'll never see the view and when you look how far you've climbed, you'll find the courage to put through." I'm in love with this song and I consider it one of mankind's greatest achievements, no jokes! I don't care if you're a Gumball fan or not, I very much recommend you to listen to this song. If you're having a rough time, it can really help, even just for a few minutes. I know it managed to help me. Blessed be everyone who worked on this song!

Whew, the second to last blog is over. You might be wondering how this isn't the last one since the show has only six seasons, but I'm planning to end this series by making a top 5 list of all the songs in the entire show. I hope it won't be very predictable, I guess I'll come up with something. Next Thursday is the last one without school for me and I'll try to put as much effort in that last blog as possible. Until then, zoopity boopity bye!

There are other songs in the show and other seasons. I reviewed the songs in season one, season two, season three, season four and season five so, if you liked what you read now, consider checking them out.

Retrieved from "https://theamazingworldofgumball.fandom.com/wiki/User_blog:MarvinDarwin/Top_5_Songs_of_Season_Six?oldid=520792"
Community content is available under CC-BY-SA unless otherwise noted.