"The Upgrade" is the twelfth episode of Season 4 of The Amazing World of Gumball. It is the 128th episode overall.[1]

Bobert gets updated software, but Gumball and Darwin find a few problems with it.

The episode begins with Gumball and Darwin watching an advertisement for a brand new upgrade for the Bobert operating system. Although the brothers are excited for it, Bobert questions the need for an upgrade, to which Darwin replies that it might make him more likable. Bobert is saddened to hear that his friends are not satisfied with his current system and immediately wants the new upgrade and begins downloading it.

After seventeen hours, his new system is installed and fully upgraded, and he now has various new and improved applications. However, the update appears to cause issues with voice recognition and random freezes. Fed up with the recurring problems, Gumball and Darwin take Bobert to the Bobert Store in order to have him fixed.

Once there, Gumball asks an employee to downgrade Bobert, only to be told that the company's policies are to focus on perfection and break away from past systems. But as Bobert cannot function properly because of the upgrade, the boys demand Bobert's old system back. However, instead of fixing him, the employee replaces him with a newer model while Bobert is sent to a factory. Determined to get him back, Gumball, Darwin and the new Bobert fly to the airport where Bobert is being shipped back in an airplane.

The trio manages to fly up to the plane and open the cargo doors and everything falls out, including Bobert, who is still frozen. Gumball dives down to save him and attempts to revive him with a car battery, to no avail. Fortunately, he finds Bobert's old system and installs it. Seconds away from hitting the ground, Bobert is activated and saves Gumball. After that, Gumball and Darwin return the new Bobert to the Bobert Store. The confused employee asks them why they would want a downgrade, to which Gumball replies that one does not need the latest things to be happy and that some things do not need changes. Then he adds that the new one bends when sat on, and they try to leave. However, all of them hit their head and pass out, ending the episode. 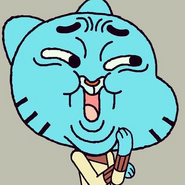 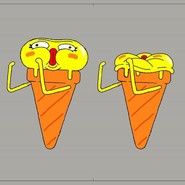 [An advertisement for a new Bobert operating system plays]

Narrator: We've seen the truth. And the truth is the unknown. But the unknown can't just be about the truth. The truth is the unknown can only be as truthful as the truth of the unknown can be. And that's the truth. We've changed the world as we know it for the first time since the last time. Let me introduce a new Bobert System. Coupled with a new updated microchip and a new integrated AI, this operating system allows the user to enjoy a truly singular experience, giving you access to a whole new range of functionality. It isn't just a perfect blend of software and hardware—it's lifeware. Bobert: let the future and the past collide to define your present.

[Gumball and Darwin sit in front of the computers in the library, pointing excitedly to their screens and then to Bobert. Bobert seems confused]

Gumball: How can you not be excited?!

Bobert: Are you not satisfied with current version of friend?

Gumball: I dunno. Are we getting a truly singular friendship experience?

Darwin: Look. You know, we'd love you just the way you are, but we feel like we could love you more if you were... better.

Darwin: What does that stand for?

Gumball: Aw, sorry we made you feel bad. You're great the way you are, you don't have to change a thing.

Bobert: Negative. It is logical that all things must change for the better. I want the upgrade.

[Gumball and Darwin dance for a while, then stop]

Gumball: As long as it is your decision.

[Bobert plugs himself in]

[Seventeen hours later, Gumball and Darwin are still standing there, covered in cobwebs]

Gumball: Can you blow on my eyeballs? I've been staring for too long.

[Darwin blows all the webs and dust off of them. Shortly after, Bobert's upgrade is done installing]

Gumball: Okay, okay. What's new? What can we do?

Bobert: My screen display now has a mild three-dimensional effect.

[Bobert takes a picture of them. Gumball swipes through various filters]

Darwin: Nice! It's got a bro mode.

Darwin: Ooh, what's the guilty pleasure filter? That's amazing! But there will never be a filter that replaces people's quirky individuality. Huh, what do you know? What else can you do?

Bobert: I have an in-built health application.

Gumball: How does that work?

[Bobert starts shooting lasers at Gumball and Darwin, forcing them to run]

Gumball: How is this improving our health?!

Darwin: What else is new?

Bobert: I come with a free album download by a popular band. [Plays a song]

Gumball: [Screams] Make it stop! It sounds like cheese being grated through a guitar by a bunch of rich smug old people wearing leather pants! Ah, delete, delete!

Bobert: Negative. The MP3s are embedded into my hard drive.

[In the cafeteria, Gumball plugs Bobert's charger in]

Gumball: Just as well that you shut yourself down. All these new background apps are seriously draining your battery life. So...

Darwin: Bon appétit. So, what else is new?

Bobert: I have voice activation software.

Gumball: What does that do?

Gumball: 'kay. Do my homework.

Darwin: Dude, you gotta pronounce your words clearly. Bobert? Tell me how pretty I look today.

Bobert: In Japan, there are more pets than there are children.

Darwin: Is that my grammar?

Gumball: Wha— No! Cancel! You can't email that to Granny Jojo!

Gumball: No, stop it! She'll be horrified!

Darwin: That upgrade was useless. I might as well just go [Chicken noises]

Bobert: Did you say kick Leslie's butt and marry him to Alan?

Bobert: I now pronounce you husband and flower.

Leslie​​​​: [Looks at Banana Joe] You had your chance. [Walks away with a smiling Alan]

[The school bell rings, and the students are now in gym class. Bobert jumps over an obstacle, followed by Gumball and Darwin, but he freezes in mid-air, causing the two behind him to collide. In the hallway, Gumball and Darwin meet Bobert]

[They prepare to high-five, but Bobert freezes. Gumball leans in, only to be knocked out when the robot's arm suddenly extends forward. Later, Bobert keeps freezing at other inconvenient times, such as in the bathroom, in music class, and while playing baseball, causing Leslie to be hit by the ball]

Gumball: Hold on, I got this. [Walks around Bobert] Wait, I see what's gonna happen here. I'll just go...

Gumball: And take this from—

[Gumball screams as he is sent flying by Bobert's sudden movement]

Gumball: Alright, we're gonna get you fixed at the store.

Darwin: We don't know where it is!

[Gumball and Darwin walk the streets of Elmore, led by Bobert. They appear to be very exhausted]

Bobert: In twelve feet, turn down.

[They start digging down and seem to reach a sewer]

[Bobert jumps in. They come out of a toilet]

[They cruise the ocean on a raft, then walk on a bridge]

Bobert: On the bridge, turn left.

[All three of them jump off the bridge. Gumball and Darwin start screaming]

Bobert: Fall for seven meters, then stop. Position yourselves in the left lane.

[They stop falling for a moment while they move]

[They resume their fall and Gumball and Darwin continue to scream. Some time later, their voices can be heard from a grave, unintentionally grabbing the attention of Gary who is working nearby]

Gumball: Let me guess: the upgrade updated your maps.

Bobert: Make a U-turn where possible.

Gumball: Forget it! Let me ask someone.

[Gumball, Darwin and Bobert rise from the grave, causing Gary to scream]

[Gary points a finger in the store's direction]

Gumball: A thousand thanks, kind sir.

[They enter the store]

Gumball: This store is whiter than an artic fox in a wedding dress.

Gumball: Uh, what? What's that?

Cody: That would be my behind, sir.

Gumball: Oh. What's that, then?

Cody: That would be my nose, sir.

Gumball: Ew! I can't believe I touched a ponytail with my bare hands!

Cody: Welcome to the Bobert store. What can I do to heighten your experience?

Gumball: Can you please downgrade our Bobert?

Cody: Well, no. You see, our philosophy at Bobert store is to focus on our vision on the ascent to perfection, and break away from the past.

Darwin: What does that mean?

Gumball: It means no.

Darwin: But Bobert doesn't work because of your stupid upgrade!

Cody: Here at the Bobert store, we like to provide a worldwide quality experience that opens on a truly synergetic—

Cody: Let me take a look. [Picks up Bobert and goes into the store room] Hey, Jaden.

Cody: And here we are. [Places a black Bobert in front of Gumball and Darwin]

Gumball: Wait a minute, that's not our Bobert!

Cody: Well, I upgraded your product.

Darwin: But Bobert is not a product, he's our friend.

Gumball: Yeah! He's not something you can just replace, like a— Hold on, do you mind if I just— [Peels off screen protector] What's new with this model?

Cody: Oh, he's been sent to our factory with the rest of our products which were purposefully designed to fail so that you're forced— I mean— Uh, I mean—

Gumball: You're coming with us. Let's move, people!

[Gumball tries to leave the store, but runs into furniture as the room is completely white. He eventually finds the door, and they leave riding on New Bobert's back]

Gumball: You gotta admit, he's much more comfortable than the old one. Much more...ergonomic. I mean, the old one was—

Gumball: What? Way faster, too.

[They land near an airport. Bobert is nowhere to be seen]

Darwin: Yeah, we're right on top of the dial.

[New Bobert blasts off with Gumball and Darwin, following a plane]

Darwin: What? No! That's way too dangerous. Just get me closer. [Knocks] Hello, could you please open the door?

[The door opens, releasing all of the cargo inside. Gumball is thrown off New Bobert and has to hold on to the falling objects]

Darwin: Don't worry, New Bobert will save us.

[Furniture is rapidly falling in their direction. New Bobert prepares to shoot]

New Bobert: Activating defense application. Would you like to rate "Debris Masher" on the Bobert Store?

Gumball: I'd write something like, five stars, this is a must have for every Bobert user, well-designed with an intuitive interface. [Shouting] But we don't have the time! Fly us to safety!

[New Bobert flies off carrying Gumball and Darwin, leaving Bobert on his own]

Gumball: What? No! Bobert!

[Gumball pushes himself off New Bobert to catch up to Bobert]

Gumball: Come on, man, wake up! Clear! [He tries to wake Bobert up with a car battery; this fails] There's gotta be something. [He grabs a falling CD] Nah. [He throws it away, but quickly takes it back] No, wait, no! Your old system!

[Just as they are about to hit the ground, Bobert catches Gumball and takes off with him]

[Gumball, Darwin and Bobert return New Bobert to the store]

Jaden: I don't understand, sir. Why would you want to downgrade?

Gumball: Because, to be happy, you don't always need the latest thing. Because looking for something better can sometimes mean losing what you really love. Because there's nothing we would change about our friend Bobert. We're happy to grow obsolete together.

Gumball: And because the new one bends when you sit on it.