The Tale of Zelmore is a video game from The Amazing World of Gumball. It was first shown in "The Flakers," being played by Darwin and Anais. In "The Promise," Gumball and Darwin express excitement for its sequel.

Gumball and Darwin checking the website for new updates by constantly refreshing the page.

Gumball holding the disc for the sequel of the game, The Tale of Zelmore: The Golden Lake. 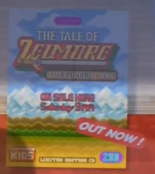 A poster of the game. 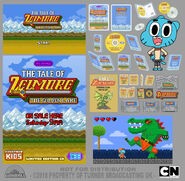 Designs
Add a photo to this gallery

Retrieved from "https://theamazingworldofgumball.fandom.com/wiki/The_Tale_of_Zelmore?oldid=568693"
Community content is available under CC-BY-SA unless otherwise noted.