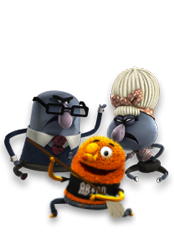 The Robinsons are the Wattersons' next-door neighbors. They are both blue-gray (excluding Rocky), with large Muppet style pink-purple noses, and are animated in CGI. Their species is unknown, though they strangely resemble Muppets, and seem to have a thin fuzz on their skin. However, their son Rocky is fully furry; this could mean they either shaved, or lost all their hair. They have a white car, which is sometimes parked in front of one of the Watterson cars. Gaylord and Margaret (as of "The Car") have both been arrested. Both Robinson parents hate the Wattersons, although the Wattersons' children Gumball and Darwin seem to like Mr. Robinson.

Retrieved from "https://theamazingworldofgumball.fandom.com/wiki/The_Robinsons?oldid=524309"
Community content is available under CC-BY-SA unless otherwise noted.