The Amazing World of Gumball Wiki
Register
Don't have an account?
Sign In
Advertisement
in: Galleries, Episode Galleries, Season Four,
and 4 more
English

View source
watch 01:36
We're Getting Mutants in the MCU - The Loop
Do you like this video?
Play Sound
General
Gallery
Transcript

"The Love"[1] is the twenty-sixth episode of Season 4 of The Amazing World of Gumball. It is the 142nd episode overall.

The people of Elmore help Bobert search for the meaning of love.[2]

The episode begins with Gumball and Darwin using the computer until they hear something going on. They find Bobert, who says he has been infected with a virus called ILOVEYOU.EXE. Gumball and Darwin tell him this means he is in love. Bobert is unsure as to what this means, so Gumball, Darwin, and some other students try to teach him by singing "What is Love."

The first segment shows the hexagon lady using the Internet to online date. After some time passes, Timmy reveals himself to her, though she deletes him from her laptop, sending him back to his room.

The second segment starts with the melted cheese guy talking to his sandwich to motivate himself to confess his feelings for Karen. As soon as Karen walks toward him, she slips on the sandwich, ending the segment.

The third segment starts with a narrator talking about what happens when one finds themself in love. In the end, the male and female end up running to another male and female, with the narrator deciding love has no rules and says to dance instead.

The fourth segment features Nicole and Richard being recorded and interviewed. Nicole tries to explain something, but after numerous attempts, the two just hug each other.

The fifth segment shows the Sun and the Moon complimenting each other over the day-night cycles. They then find a way to spend time together via the Moon spinning around Earth, which annoys Earth.

The seventh segment is about Sussie's parents having dinner at Dump's Cave. They both start feeding each other, making a mess in the process. and they then start to kiss, which disgusts the other couples there. The segment ends with Harold asking the waiter for his check.

The eighth segment shows Gary driving, while turning his head back to admire Martha. This causes him to crash into the Donut Cop's car.

The ninth and final segment starts with Richard walking on the sidewalk, noticing Billy crying. He hugs Billy until Felicity calls the police. Richard gets sent to court and is sentenced to jail. He tries to hug the prisoners, who in turn punch him so hard he flies out of the jail and lands in the hospital. A screen comes up saying love is the answer to almost every problem, but then the rest of the Watterson family meets Richard and hugs him. A similar screen then reads "Nah, every problem."

Gumball, Darwin, and some of the other characters then perform a reprise of "What is Love?," asking Bobert what he has learned about love. Bobert then reveals that he has fallen in love with a vacuum cleaner. Gumball and Darwin begin to object, but then stop and shrug at each other, ending the episode. 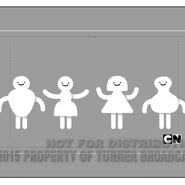 [In the library, Gumball and Darwin are on the computers when they hear mechanical noises. They go investigate with their hands to their ears]

Gumball and Darwin: What the--?

[Bobert's brain is exposed with a screwdriver in it]

Darwin: What's wrong with your system?

Gumball: Dude. It's not a virus, you're in love.

Bobert: If I understand you correctly, you have narrowed the definition of love down to everything and everywhere and everyone. Does not compute.

Gumball: Maybe a song would help you understand. Come on, man, count us in!

[Gumball and Darwin prepare to sing]

Gumball and Darwin: Love. What is love?

Bobert: Yes, that was my query.

Gumball: What is love?

Darwin: Does it fall from above?

Gumball: Listen, Bobert, to the words we sing.

Gumball and Darwin: We are love and love is everything.

Carmen: I love my boyfriend.

Billy: I love my mother.

Rocky: I love my television.

Nigel Brown: [to Miss Simian] Darling, I love you.

Lucy Simian: Love is as old as time.

Anton: And love is always new.

Gumball and Penny: Do we love each other? I guess we sorta do.

Everyone: Love is everywhere and love is in you.

Listen, Bobert, are you starting to believe?

Bobert: Love is scoring zero in a tennis game.

Gumball: Love is all around us.

Gumball, Darwin, Carmen, Idaho, Anton, and Clayton: What is love, does it fall from above?

[Everyone's eyes turn into hearts on the last word]

Chatter (chat box): Oh sorry, I forgot you were a noob. I said I'm new to dating as well.

Hexagon lady (chat box): Okay, so let's get to know each other.

[Hexagon Lady is about to eat her pizza]

Chatter (chat box): But not everyone is eating one right now.

Hexagon lady (chat box): How do you know that?

Chatter (chat box): The same way I know you searched your own name online 3 times today.

Hexagon lady (chat box): What, are you spying on me, you creep?

Chatter (chat box): It's not my fault if you put your whole life on the internet! Oh and your relationship status on Elmore Plus, it's really not complicated - you're single. So, (uh...) fancy meeting up irl later this week?

Hexagon lady (chat box): Sorry! But my diary is full.

[Hexagon Lady checks on her diary, which appears to be empty, but has her hairdresser day in it.]

Hexagon lady (chat box): What the- Okay, stop joking, who is this?!

[Her laptop screen switches from her diary to Timmy, who is revealed to be her date chatter]

Timmy: Well, duh. You're on an Internet dating site. What did you expect?

Hexagon lady: Get out of my computer!

Timmy: Don't tell me what to do. I am legion. I am everywhere. You can't control the Internet!

Hexagon lady: No, but I can Control-Alt-Delete it.

[Hexagon Lady presses the CTRL, ALT, and DELETE buttons forcing Timmy out of her laptop. Scene cuts to Timmy's room which he returns to.]

Love [luhv] def: 2. It starts with yourself.

Melted Cheese Guy: You are the most beautiful thing on this Earth. Some might say you're excessive, but they don't know how glorious you are on the inside. Layer after layer reveals more surprises. You are precious. You are beauteous. You are pure. You deserve this love.

Melted Cheese Guy: So drop your stupid sandwich and go talk to her! Karen?

[Karen slips on the sandwich and falls on the floor. Melted Cheese Guy hides himself from embarrassment]

[The background, houses and trees are in green and white. Two simple-designed stick people, both male and female, walk in]

Narrator: Love was once a mysterious force, understood by birds and bees. But today, it can be explained by science.

[Two stick figures look at each other, designated by arrows]

Narrator: Love begins with a visual signal received by eyes. This signal goes directly to the stomach, causing what we call in scientific terms "butterflies."

Narrator: The signal bounces back, causing the body to go into shock.

[The male stick figure's stomach goes directly to his heart and lungs, causing the organs to behave in shock]

Narrator: The body then experiences a rise in temperature, causing the palms of the hands to perspire.

Narrator: The shock extends to the lower parts of the body, causing a symptom known as "jelly legs."

[Both stick figures begin moving their arms and legs]

Narrator: Finally, the signal reaches the brain and significantly reduces any form of cognitive ability.

Narrator: Oh. Oh well, scratch that. There are no rules to love. So let's just dance.

[Nicole tries to explain how her relationship with Richard is, but she can't explain very well, as she feel nervous of what to say]

[The scene changes to the Sun and Moon changing the times of the day.]

The Moon: You know, I was thinking maybe we could-ugh. [Mocking herself] Looking hot. That's like asking Saturn to give me a ring. Well done, Moon.

The Moon: [Appears again, but in a crescent shape] Oh hey, hey.

The Sun: Oh hi. Say have you lost weight?

The Sun: [Laughs] Oh hey, I was wondering if you wanted to, you know, come hang out on this side.

The Moon: Uh, ya huh! [Goes down to the Earth; people scream] Whoops, I just flooded Europe. It's okay, I've got a better game.

[The Moon starts going around Earth and playing peek-a-boo with the Sun.]

[The Sun laughs and the Earth gets annoyed.]

[It next shows the Robinson's when they were younger and getting married. It then shows them moving into their house and spending time together. Then Rocky is born and they keep fighting, but then Mrs. Robinson coughs indicating that she might be sick. They spend more time together but Mrs. Robinson falls down to the floor feeling weak. It shows Mr. Robinson talking to a nurse at the hospital while feeling sad. He paces back and forth, and then sees Mrs. Robinson lying down on her bed. He holds her hands and she opens her eyes, which make Mr. Robinson happy. She tells him to come closer and shocks Mr. Robinson. Then they both keep fighting ending the segment.]

[Sussie's parents are having dinner at Dump's Cave.]

Sussie's mother: Thank you, sweetheart. A toast to our love.

[They raise their glasses and clink them, spilling their drinks as they laugh.]

Sussie's father: [Laughs] What did you order?

Sussie's father: Spaghetti and meatballs. Would you care to try some?

[Sussie's father tries to feed his wife a meatball, smearing her face with spaghetti sauce in the process.]

Sussie's mother: Mm, delicious. Try some of mine.

[She attempts to feed him soup, but most of it ends up on his face. Harold and Jackie stare at them in shock.]

Sussie's mother: This is the most romantic night of my life.

[They make kissing noises at each other. The other couples are clearly disgusted.]

[Gary is driving his car in Elmore. As he stares at the Cupcake Woman who is waving at him, he crashes into Doughnut Sheriff's car.]

Love [luhv] def: 9. It is the answer to every problem.

[Richard is walking in the street when he notices Billy crying. He hugs Billy, until Felicity calls the police. Richard hugs Felicity as well as the officer who comes to arrest him. He is sent to court, where he hugs the judge and is sentenced to jail. He then tries to hug the prisoners, who punch him out of jail and directly in the hospital.]

[A card reads: "Well, it's the answer to almost every problem."]

[The rest of the Watterson family hugs Richard in his hospital bed.]

[Another card reads: "Nah, every problem."]

What Have We Learned About Love [luhv]

Gumball: So Bobert, what have we learned about love?

Everyone: What is love? It's what we all dream of.

Tell us, Bobert. What have you learned about love?

Bobert: Anyone can love. No love is wrong.

I have now become a lovesick dreamer. I fell in love with this old vacuum cleaner.

[Bobert hugs a vacuum cleaner while everyone stares, confused. Gumball and Darwin shrug.]