"The Future" is the thirty-fourth episode of Season 6 of The Amazing World of Gumball. It is the 230th episode overall.

Banana Barbara can predict the future, but she can't predict her own disappearance.

The episode begins at night at the Bananas' house. Banana Barbara has just finished her latest painting and places it on the wall along with her paintings of previous episodes from the past. Suddenly, she sees a shadowy figure on her painting, not noticing the same figure behind her. Banana Barbara then turns around and sees that it is Rob, who kidnaps her.

One week later, Banana Joe tries to set a poster about his missing mom, but Gumball and Darwin's way of advertising is not very helpful. Joe then states that his mother went missing multiple times before (and was found in various unusual places), but not for as long as the current occasion. The Watterson brothers want to help but are unsure of where to start.

Trying to discuss where Barbara would be, Gumball and Darwin point out that she is very unpredictable. Joe states that she used to be more sensible, but after being overworked by Mr. Chanax, she finally snapped and suffered from a "burnout," which caused her to become the way she is today. Banana Joe and the two brothers decide that the only way to find the former's mom is to think like her, and the trio proceeds to act "stupid" to retrace her steps.

Meanwhile, at a warehouse in the junkyard, Rob is forcing Barbara to paint the future, but all she ends up painting are multiple out-of-context scenes of Gumball, Darwin and Joe, and multiple drawings with static resembling the Void, much to Rob's annoyance. When Rob's back is turned, Banana Barbara takes some of the pictures with the three boys and paints clues to lead them to her location. Unfortunately, since the trio is still acting stupid to find her, they end up misinterpreting or ignoring said clues.

However, Barbara does have one last idea: to paint a hole that would teleport the boys into the warehouse. Rob turns around and notices Barbara altering the paintings and thinks she can change the future, but before he can learn more, Gumball and his friends fall down the hole and end up in the warehouse with them.

Rob quickly uses Banana Barbara's powers to change reality to combat the trio and ends up knocking Joe and Darwin out, leaving Gumball alone to fight until he manages to get closer to Barbara's canvas. While confronting his arch-nemesis, Rob states that the reason for the kidnapping was more important than Gumball. Darwin and Banana Joe become conscious and knock over Rob. The three boys go to the easel and erase Rob from existence via multiple brush swipes over a painting of him. Joe and Barbara are glad to be together again, but the Watterson brothers feel bad about Rob and ask Barbara to paint him back into existence. When she does, however, it is within one of the paintings of the Void, and when Gumball states that they will see Rob in the future, Banana Barbara enigmatically says "But there is no future..." and the screen cuts to static before the episode ends. 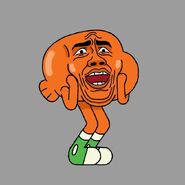 The Future mini-clip 1 2 - The Amazing World of Gumball

Where Is Banana Barbara?

[The episode starts with a shot of the Bananas' house, with light coming from the garage. Creepy music plays as the screen shows many of Banana Barbara's paintings]

Banana Barbara: [Hangs a painting of herself hanging it] There. Finished.

[Banana Barbara notices a shadow in her painting]

Banana Joe: Hey… do you mind if I put a picture in your window? It's for my mom… she's missing.
Larry: Oh, gosh. Go ahead.

[Banana Joe tries to pin the picture onto the glass door with a hammer, but ends up breaking it.]

[Banana Joe looks behind him and notices multiple broken windows]

Banana Joe: Yeah, well, maybe we need a different poster. This photo isn't even of her! [Holds up the poster]
Gumball: Sorry, but it's just advertising 101, man. That's what sells. Babes and babies.
Banana Joe: And what kind of slogan is this? "Banana Barbara, 20% off 'cause she's past her best?!" That's my mom you're talking about!
Darwin: I told you we should've gone with "Banana Barbara, the ripest on the market."
Banana Joe: Look, I'm sorry. It's just, she's never been missing this long before.
Gumball: Don't worry man, look, where did you find her the other times?
Banana Joe: Well, she once spent half of December in a Christmas stocking.

[flashes back to December. Santa Claus falls down the chimney and wipes dust off of his suit]

Banana Barbara: [Suddenly pops out from inside the stocking] You'll find my tooth under the pillow!
Santa Claus: AHHHH! I'm not the tooth fairy, Barbara.
Banana Barbara: I never said you were! [Goes back into the stocking]
Banana Joe: Another time we lost her at the airport, and we found her in a Japanese Karaoke video. [flashes back to a video where Barbara falls down a waterfall] Then there was the time we found her playing a chicken in a TV show.
Darwin: Wow, I knew she could paint the future, but I didn't know she could act!
Banana Joe: It was more of a musical act.

[Banana Joe flashes back to Banana Barbara playing a chicken as an instrument to the tune of 'Scotland the Brave'.]

Banana Joe: [sighs] Where is she?

[Flashback, Banana Barbara cuts off Byrdie's hair and puts it on Tony's head]

Felicity: Oh, what a pretty baby!
Banana Barbara: She said, while in truth she thought it looked like an old monkey's kneecap.

Darwin: Do you think it's possible that maybe your mom suffers from some kind of head problem?
Banana Joe: I don't know about suffers, she seems to really enjoy it. But, yeah, she's full blown bananas. She wasn't always like that, though. It sort of happened a few years ago...

[Flashback to a few years ago. Barbara is carrying a large stack of papers]

[Barbara drops the stack of papers and pours him a cup of coffee.]

[Darwin and Banana Joe shrug]
[Gumball, Darwin, and Banana Joe all start acting like a banana and start dancing. Cuts to the junkyard. Banana Barbara is painting static in a room]

Rob: No. No, no, no! The future! I want you to paint the future! What happens next? That can't just be the end! I need your power! [sweetly] Heh, now, come on, Barbara, one more time! Work your magic, paint the future. [Banana Barbara starts painting] That's it. [Sees that she's painting static] Ugh. No, no more static! I'm gonna give you one last chance, you're gonna tell me everything you know.
Banana Barbara: Okay. Your stomach produces a new layer of mucus every two weeks, otherwise it'll digest itself. A blue whale's toot bubble is large enough to enclose a horse.
Rob​​​​​​​: No! NO! [breathes heavily]
Banana Barbara: [whispers] Hippopotamus milk is pink.
Rob​​​​​​​: You are gonna take this… [gives Barbara a paint brush] and you're gonna paint what happens next. Otherwise, that face of yours won't be so… a-peel-ing. Wait, that came out way lamer than I expected. JUST PAINT!

[Rob kicks an empty paint can, then kicks a much heavier paint can and starts limping. Meanwhile, Gumball, Darwin, and Banana Joe are dancing around Elmore]

Banana Joe: And how does this help us find my mom?
Gumball: It's simple, if we follow her mental process, we'll retrace her steps.
Darwin: So what would she do next?
Banana Joe: She'd definitely be licking the public payphone receiver.

[Gumball's shadow points to the left]

Darwin: Me too! It's like that shadow is pointing the way.
Gumball: Now, what would your mother do?
Banana Joe: Definitely go in the opposite direction.

Rob​​​​​​​: Hey, Barbara. You better get going, otherwise… [tries to shove a regular banana into his mouth but accidentally pushes it into his eye] Ow! Sorry, it's just with only the one eye I've got really bad depth perception and, um… GET BACK TO WORK!

[Barbara paints a new cloud in a painting that points the way. The new cloud appears in real life above Gumball, Darwin, and Banana Joe]

[The three of them keep walking]

[Barbara paints a painting on a wall that has the junkyard with a speech bubble that says, "I'm here Banana Joe"]

Banana Joe: Look at that speech bubble! "I'm here, Banana Joe".
Gumball: Of course, Barbara must be inside this wall!

[Gumball, Darwin, and Banana Joe try to go inside the wall, cow sounds play whenever one of them try and fail]

[Gumball, Darwin, and Banana Joe fall through the portal]

Banana Joe: You made a big mistake, my friend, you might've thought I was a harmless clown, a joke, but you messed with the wrong guy's mother! [rips his skin off]

[As Gumball is walking backwards, he steps on the button of a remote that controls a giant magnet, which makes everything metal go towards it, including Rob's bazooka]

[Gumball realizes a bunch of dangerous tools are flying towards him, which he manages to dodge. Then a giant bus comes towards him, which he jumps into, and the bus explodes as he's jumping out, then he runs toward Rob again. Rob paints water, which covers the whole floor. Then Gumball sees a shark fin swimming towards him, so he panics and tries to swim backwards. When it hits him, he lifts it up and realized it's only a fin.]

Gumball: Ha ha, you should've drawn the rest of the…

[Rob shows Gumball that he finished drawing the shark, and the fin becomes a whole shark. Gumball jumps off of the shark and onto Rob]

[Rob and Gumball stop as everyone's focus is directed towards Joe]

Banana Joe: What did I say about underestimating m...uh!

[Darwin uses Joe as a baseball bat and hits Rob]

Rob​​​​​​​: [Almost fully erased] Wait, no, please, no! [Voice echoes as he's fully erased. Everyone stares at where Rob stood in shock. Gumball walks over and picks up the remainder of the crowbar Rob held]
Banana Joe: Mom! I missed you.
Banana Barbara: And I miss hardcore hip hop.
Gumball: [sighs] I guess all's well that ends well.
Darwin: Except for the guy we kinda straight up erased from existence.
Gumball: Yeah, I feel pretty bad about it right now, but you know, maybe we'll laugh about it later! Let's try it. [clears throat] Hey, remember when we straight up erased that guy from existence?

Gumball: Yeah, no. Barbara, can you paint him back into existence, please?

Gumball: Oh, and can you give him something lame, like a goatee or a third nostril or something?

Gumball: Haha! Perfect. [He and Darwin begin to walk away] See ya in the future, Rob!
Banana Barbara: [slowly turns around, smiling as she speaks] But there is no future.