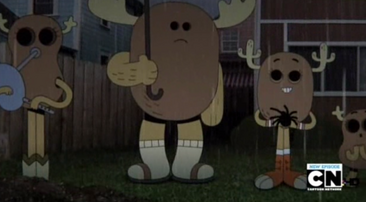 The Fitzgeralds are an anthropomorphic antlered peanut family living in the city of Elmore. They all have the appearance of an anthropomorphic peanut, with varying sizes and shapes, tall and small. As well as resembling peanuts, they all have antlers of varying sizes. The fact that their bodies have holes in them suggest that it is a type of shell. This was shown to be true in the episode "The Shell."

As Penny was revealed to be a shapeshifting fairy-like creature in "The Shell," it can be assumed that the rest of her family are also similar beings. The reason they wear these shells in the first place remains a mystery. In "The Transformation," it is revealed that their ancestors also wore these types of shells as well.

Retrieved from "https://theamazingworldofgumball.fandom.com/wiki/The_Fitzgeralds?oldid=524321"
Community content is available under CC-BY-SA unless otherwise noted.