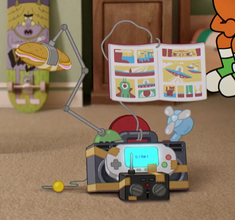 The Entertainernator is an invention made by Gumball that first appeared in "The Nobody."

It consists of a video game strapped to a boombox, a comic book, a small fan, a ping pong paddle, a remote-controlled helicopter, and a sandwich. It was designed to acommodate for a child's short attention span.

The contraption was stolen by Rob, prompting Gumball and Darwin to investigate and discover him hiding in their house.

Retrieved from "https://theamazingworldofgumball.fandom.com/wiki/The_Entertainernator?oldid=525712"
Community content is available under CC-BY-SA unless otherwise noted.