The Amazing World of Gumball Wiki
Register
Don't have an account?
Sign In
Advertisement
in: Male, Minor Characters, Characters,
and 3 more
English

The teal tow truck driver is a minor character in The Amazing World of Gumball. He made his first appearance in "The Pony." He looks very similar to John.

The teal tow truck driver has a mustache, and matching eyebrows to go along with it. He wears an apron over his clothes that is the same color as (or similarly colored to) his skin.

He seems to be a decent worker, but in "The Pony," he is shown to be selfish. When Tony gets stuck in a manhole, he leaves the problem up to Gumball and Darwin merely because they were closer to him. He does not even try to help them, and laughs when Gumball tries and fails in pulling Tony out (this is seen when Darwin is calling Anais). 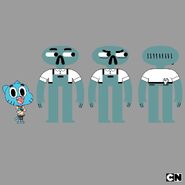