Sussie's parents are minor characters in The Amazing World of Gumball. As their name suggests, they are the parents of Sussie, and as such, are live-action chinikin people. Their first appearance was in "The Pony," in which they attend their daughter's birthday party. Sussie's father offers Gumball and Darwin $1,000 to merely stay at the party, but, much to Gumball's misery, Darwin forces him to decline.

Sussie’s father has a brown beard and wears a beige suit with black shoes.

Sussie’s mother has a brown wig and wears a black suit with white shoes. 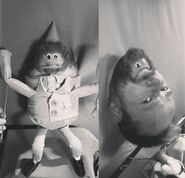 Retrieved from "https://theamazingworldofgumball.fandom.com/wiki/Sussie%27s_parents?oldid=553140"
Community content is available under CC-BY-SA unless otherwise noted.