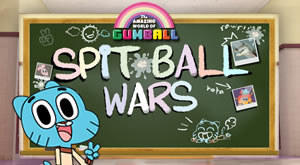 Spit Ball Wars is an online game based upon The Amazing World of Gumball.

The objective of the game is to shoot as many spit balls as possible at the characters, except for Principal Brown. If the player shoots at him, the player will get a detention, ending the game. To gain a higher score in the given time, the player must collect rolls of tissue paper to be used as ammunition. If the player spits enough spit balls at a character, they will run or escape quickly. Some characters need to be spit at more times.

In the left corner, one can see Tobias' different design.

Retrieved from "https://theamazingworldofgumball.fandom.com/wiki/Spit_Ball_Wars?oldid=541639"
Community content is available under CC-BY-SA unless otherwise noted.