The Amazing World of Gumball Wiki
Register
Don't have an account?
Sign In
Advertisement
in: Characters, Minor Characters, 2D Characters,
and 7 more
English

The shape people are minor characters in The Amazing World of Gumball. They made their first appearance in "The End." They can be seen standing across the street for a split-second before the bus pulls up, and obscures the audience's view of them. They get a larger role in "The Extras." They reappear in "The Law."

Three of them are a triangle named Ed, a rectangle, and a pentagon. Ed is colored blue, and is the tallest, mainly because of his long legs. The rectangle is colored black, and is the shortest, being only as tall as Banana Joe. He also only has one eye. The pentagon is in the middle, according to height. She, like the rectangle, is also colored black. There are also another blue triangle, two blue pentagons, two blue squares, two orange squares, and two yellow triangles. 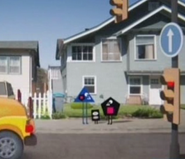