Ripley 2000 is a video game store that first appears in "The Refund." It holds many similarities to Laser Video, as Larry is employed at both locations, and each has a near identical design to the other. Two of them have been seen; one in the mall and another near the supermarket.

Unlike Laser Video, Ripley 2000 has no return slot and sells both video games and DVDs. Several posters cover the store's exterior.

A partial in-view of the store. 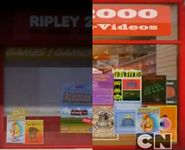 A comparison between the old and new designs.
Add a photo to this gallery

Retrieved from "https://theamazingworldofgumball.fandom.com/wiki/Ripley_2000?oldid=567425"
Community content is available under CC-BY-SA unless otherwise noted.