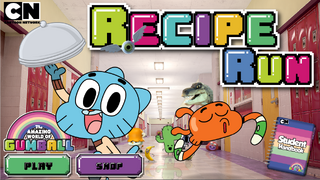 Recipe Run is an online game based on The Amazing World of Gumball. It is exclusive to CN Asia Pacific.

Gumball and Darwin have made another infamous dish for Anais to try and the rest of the campus seems out to stop him! Leap, duck, and dash your way through the school corridors and collect every weird and wacky new ingredient you can for the perfect zaniest plate. But keep an eye on the crowd meter, or your run might end too soon!

As the player chases Anais through the hallway, there are several different obstacles to look out for. Most are classmates that happen to be in the hallway. Gumball must either jump or duck to dodge them, depending on how high the obstacle is (jump if the obstacle is on the ground, duck if it is flying at him in midair). To jump, the player must click and drag the mouse up. To duck and slide, the player must click and drag the mouse down. In addition to this, Darwin may be tagged in every once in a while. Calling him in provides temporary immunity to obstacles. Gumball may still jump to collect food items that are in mid air.

Failing to avoid an obstacle results in Gumball staggering for a second, allowing time for the angry mob behind him to catch up. Ducking also slows down Gumball, letting the mob catch up to him. If the mob reaches Gumball, they suck him in, and the game ends.

Also in the hallway are additional ingredients that can be added into Gumball's tray. The added ingredients give more points, and different responses from Anais. There are eight categories of food items: corn, meat, fish, sandal, shoe, soda, potato, and bread. Collecting ten of each of these items total amongst all games played will result in a random shop item being unlocked.

Accessible from the main menu is the shop, which brings the player Rocky's store that sells power-ups and other characters to be used in the game. The power-ups can be bought using the CN Site currency and it is a one-time use and must be bought again the next time while purchasing characters will add obstacles in the game.

The ingredients collected throughout the game can be used to redeem random rewards in the Ingredients section of the Student Handbook. The reward can be redeemed once the player has ten of all collectable ingredients, whereupon a white lunch box contaning the reward will appear.

NOTE: Badges can only be earned on the Cartoon Network Asia Pacific websites, and the player must have an account and be logged in to claim them.

That's A Bit of Corny - Collect ten corn cobs for your dish.

Soda so Good - Collect five soda drinks for your dish.

Meet You Again Soon - Collect ten chunks of meat for your dish.

Pick a Potato - Collect fifteen potatoes for your dish.

Shoe Use a Bit More Flavor - Collect seven shoes for your dish.

Something Fishy - Collect twelve fishes for your dish.

Bread Winner - Collect seventeen slices of bread for your dish.

Bad Unlucky Day - Getting tackled within the first minute of the game play.

Jumping for Joy - Jump a total of fifty times.

Jumping Overjoyed - Jump for a total of one hundred times.

Duck like a Duck - Duck a total of fifty times.

Duck defying - Duck for a total of one hundred times.

Go the Distance - Ran for a total of fifty feet.

Reach the Moon - Ran for a total of one billion, two hundred and sixty-one million, one hundred and fifty thousand feet.

I can do this alone! - Reach one minute of gameplay without using Darwin.

Look out, it's Hector! - Ducked to avoid Hector five times.

Look out, it's Carmen! - Jumped over Carmen five times.

Look out, it's Idaho! - Ducked to avoid Idaho five times.

Look out, it's Tobias! - Ducked to avoid Tobias five times.

Look out, it's Ocho! - Jumped to avoid Ocho five times.

Look out, it's Carrie! - Ducked to avoid Carrie five times.

The Class is Against You - Get struck by every character at least once.

Simplest Dish Ever - Ended game without collecting any additional ingredients.

Ducking Escaped - Avoid getting by the mob by an inch while ducking.

Retrieved from "https://theamazingworldofgumball.fandom.com/wiki/Recipe_Run?oldid=568707"
Community content is available under CC-BY-SA unless otherwise noted.