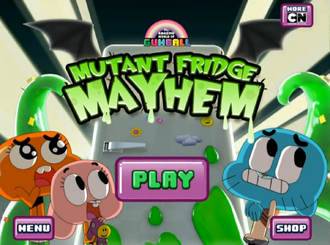 Mutant Fridge Mayhem is a game for iOS and Android. The game was released on December 13th, 2012.

Richard is peacefully napping when the doorbell rings. Outside, he finds a mysterious package, and upon opening it, discovers a seventeen-year-old jar of Auntie Grandma's Jelly O' The Month. Ignoring the obvious signs of old age and expiration, he opens the jar and eats some, then puts it in the fridge and lazes about on the couch. As he naps, the kids burst in through the door, and giddily skip to the fridge for a snack. They find the seventeen-year-old jar of jelly that Richard put in, now floating and glowing. It is revealed that the jelly mutated everything in the fridge, and the mutant food is now rampaging throughout Elmore. Gumball, Darwin, and Anais set out to save the city.

Immediately after opening up the fridge and discovering the glowing jar of jelly, the kids are attacked by mutant foods. They clear out the house and defeat the mutant fridge, only for it to flee before being completely destroyed. The kids pursue the fridge through the streets, fighting more monsters along the way. They confront and defeat the fridge for a second time, only for it to once again flee, this time into Elmore Junior High. The kids fight through horde after horde of mutant food, until they finally confront the fridge again. The fridge, cornered, fights more ferociously than ever, using every ability at its disposal in an attempt to eliminate the kids. It is eventually overcome by the three children, and explodes in a trembling rush of light and energy.

The Watterson family, relieved that Elmore is saved, takes a photo in front of the smoldering ruins of their house.

The game is in the style of a sidescrolling "beat 'em up" with RPG elements. Gumball, Darwin, and Anais are available as playable characters.

The object of the game is to defeat all of the enemies in the selected level. The player controls one of the three children at a time, and may switch between them by rotating the wheel in the top right corner. Each character has their own HP meter. When this meter is empty, the character becomes incapacitated, and the character to the right in the wheel gets switched in automatically. If all three characters become incapacitated, the game ends.

Gumball, Darwin, and Anais each have two unique abilities, and different basic/charge attacks.

Gumball is pure melee offense: his basic attacks are punches and kicks, and both his unique abilities involve doing direct, physical damage. "Hyper Dash" makes him go on a sugar rush, causing him to rampage across the map, dealing major damage to anything in his way.  "Tantrum" boosts Gumball's speed and damage by a significant amount for a short time. His charge attack is a headbutt, doing more damage than his usual punches.

Anais is a support, though she is capable of doing damage equal to Gumball, minus the offensive abilities. Unlike Gumball, who focuses on doing slow, high damage hits, Anais' attacks are quick and low damaging. Her two abilities focus on healing the team. "First Aid" allows her to heal the entire team for an amount dependent on level. "Revive" resurrects teammates within a certain radius, also for a level-dependent amount of HP. Her charge attack is a twister spin, dealing multiple hits to enemies surrounding her.

Darwin is an offensive ranged unit. His basic attacks are slightly weaker than Gumball and Anais', and may only hit one enemy at a time. To make up for this, however, Darwin's attacks have a longer range, and he may move while shooting. "Bubble Shield" gives him a protective shield that stops a level-dependent amount of hits. "Splash Down" causes it to rain explosive bubbles around him. His charge attack is a large bubble that travels in an arc dependent upon how long he charges. The bubble explodes wherever it lands, causing splash damage. The bubble has the added benefit of hitting the flying steaks while in midair.

In addition, there are some items that boost the offensive capabilities of the characters. They are found randomly, either through containers in the map or as a random drop from enemies. The items are as follows:

There is no experience in this game; rather, enemies drop coins that are used to buy upgrades for the three children. The "level" of the children is based on how many upgrades he or she has, on a 1:1 ratio. There are six upgrades, each with a maximum level of three. In addition, a character's second ability must be purchased before being upgraded. Because there are a total of nineteen upgrades, and the children each start at level one, the maximum level is twenty.

Health simply boosts the character's maximum health by one heart. Because three is the default amount, the maximum a character can have is six.

Strength increases the critical rate of the character's basic attack, to a max of either 20% (for Gumball and Anais), or 15% (for Darwin).

The other four upgrades are for each character's two abilities. One increases recharge time, while the other increases power. Generally, each upgrade increases the benefits/recharge rate of the ability by 25%, though certain abilities upgrade differently. Anais' "First Aid" ability, for example, adds one heart for the first two levels, and for the third level, it jumps to full healing.

There are three chapters. The first is immediately unlocked, while the next two required 15 and 30 stars, respectively. "Stars" are earned by earning a certain amount of points in each level. Each chapter has nine levels and one bonus, with each one giving a maximum of three stars. Earning stars gives bonus coins and goes towards unlocking the bonus levels. The first bonus level requires 20 stars, with the next two requiring 50 and 80, respectively.

Because We're Men!: Use the Mustache for the first time.

Tae-Kwon Dork: Upgrade a character in the Shop.

The Cotton-Tailed Cavalier: Call in Nicole and Richard by collecting the letters, G-U-M-B-A-L-L.

Dawn of the Bread: Defeat the Bread Man.

The Responsible: Free a frozen teammate.

Hallway of Horror: Unlock the third and final chapter in the game.

The Quest: Collect all 90 stars.

There are a total of nine different enemies: six minions, two minibosses, and the boss. 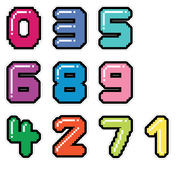 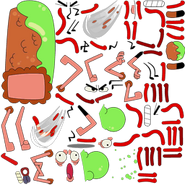 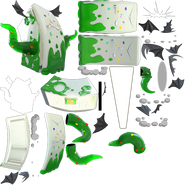 Retrieved from "https://theamazingworldofgumball.fandom.com/wiki/Mutant_Fridge_Mayhem?oldid=568570"
Community content is available under CC-BY-SA unless otherwise noted.