Mr. Gruber is a single-appearance character in The Amazing World of Gumball. Like Gary, he is one of the mailmen working for the Elmore Post Office.

He is a bald eagle dressed in a standard mailman uniform with a gold belt to go along with it. He speaks with a thick German accent. 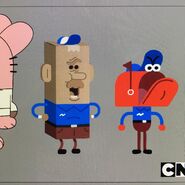 Retrieved from "https://theamazingworldofgumball.fandom.com/wiki/Mr._Gruber?oldid=588374"
Community content is available under CC-BY-SA unless otherwise noted.