The Moon is a minor character in The Amazing World of Gumball. He debuted in "The Debt," where he plays "I spy" with Saturn.

Originally, the moon was male. Later, a female variation was added, and in "The Love," was trying to ask the Sun out.

He has arms, legs, and visible buttocks when male, as shown in "The End" when he "moons" the Sun, although this was changed in "The Night," where he looks identical to the female variation, who lacks limbs and buttocks, has eyelashes and a double chin, and is a different shade of grey with different eyes and a different mouth. She is also textured differently. 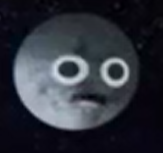 Retrieved from "https://theamazingworldofgumball.fandom.com/wiki/Moon?oldid=568226"
Community content is available under CC-BY-SA unless otherwise noted.