The Milk Guy is a minor character in The Amazing World of Gumball. He made his first appearance in "The Parking."

He is a white carton of milk. He wears a police hat without a uniform. He has yellow eyes, a pink nose, and the word "MILK" on him printed in light blue. 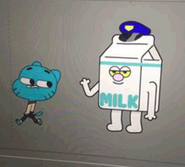 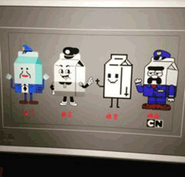 Retrieved from "https://theamazingworldofgumball.fandom.com/wiki/Milk_Guy?oldid=519844"
Community content is available under CC-BY-SA unless otherwise noted.