The Amazing World of Gumball Wiki
Register
Don't have an account?
Sign In
Advertisement
in: Games, Real Life, Real Games,
and 2 more
English

Kebab Fighter is a fictional fighting video game that makes occasional appearances throughout the series. The only known players are Gumball, Tobias, Darwin, and Richard. The only two fighters featured in the game are a muscular rat with a boxer-like outfit and a hot dog with eyes and mustard for hair. This duo has also been seen on posters. The only known stage in which fights take place is in a broken, run-down subway with a route map, an Eiffel Tower poster, two empty cans, and various graffiti.

Kebab Fighter as it is seen in "The World." 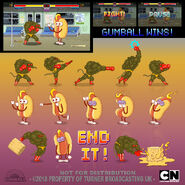