The Amazing World of Gumball Wiki
Register
Don't have an account?
Sign In
Advertisement
in: Characters, Minor Characters, 2D Characters,
and 3 more
English

Josh is a minor character in The Amazing World of Gumball who first appears in "The Guy."

He is a light teal humanoid with pink hair and freckles. He has a black unibrow. On his head is a hat in the shape of a golden pyramid. He also wears a white shirt with the eye of providence on it. Under the shirt is a dark grayish purple short. His footwear is a pair of purple shoes, with white socks inside.

He is a socially awkward, gentle kid, but he is a conspiracy maniac. He believes in a future where the world is ruled by a frog named Kratok. 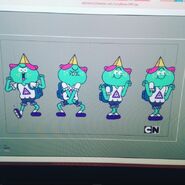