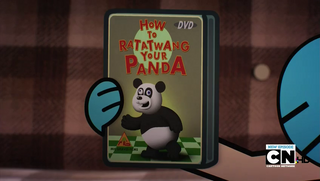 How to Ratatwang Your Panda is a mockbuster movie produced by "Mic Graves Films." Its first appearance was in "The Treasure."

Retrieved from "https://theamazingworldofgumball.fandom.com/wiki/How_to_Ratatwang_Your_Panda?oldid=538044"
Community content is available under CC-BY-SA unless otherwise noted.