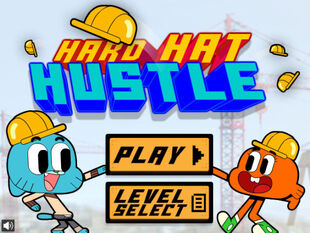 Hard Hat Hustle is an online game based on The Amazing World of Gumball. It was released on September 30th, 2013.

Gumball and Darwin's class are on a field trip at a construction tite. Patrick warns the class about wormholes and tells everyone to stick to their buddy. Gumball after listening to Patrick had already lost Darwin and has to find him.

In this game, the player controls Gumball, and the objective is to find Darwin. The player can warp through the edges (as long as it is not blocked), jump on Alan to get a boost up, move boxes (including spike boxes) and travel through wind tunnels in order to get closer to Darwin. Along the way, the player has to avoid spikes (including spikes that are shot out of spike boxes), the tools held by the construction men, as well as the obstacles that are shot out by the them.

To get a star on the level, the player must collect all the jellybeans scattered around. Bonus points will be awarded if the player finishes the level quickly.

Some gestures in the game (notably, Gumball and Darwin's special handshake) were recycled from "The Third."

Retrieved from "https://theamazingworldofgumball.fandom.com/wiki/Hard_Hat_Hustle?oldid=568703"
Community content is available under CC-BY-SA unless otherwise noted.