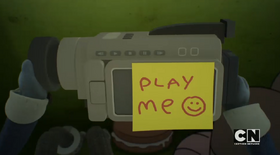 Gumball and Darwin's video camera has made several appearances in The Amazing World of Gumball.

It was first seen in "Hector's Trailer" when Darwin was shooting a video with Gumball opening his mouth wide. It is also used to tape scenes from both the original trailer and "Who is Gumball Watterson?." The video camera itself is seen in the series in episodes such as "The Microwave," and "The Tag," and has also been used to tape in "The DVD," "The Refund," "The Tape" (majorly), "The Internet," and "The Compilation."

Retrieved from "https://theamazingworldofgumball.fandom.com/wiki/Gumball_and_Darwin%27s_video_camera?oldid=524378"
Community content is available under CC-BY-SA unless otherwise noted.