The ghosts are minor characters in The Amazing World of Gumball. They appeared in the episode "Halloween" where Carrie took Gumball, Darwin, and Anais to their Halloween party. Unlike Carrie, they most likely have all died in one way or another.

The ghosts come in a variety of spooky forms, all of which are translucent.

The ghosts have abilities typical of ghosts and other undead, such as phasing through walls and dislodging body parts. They can also touch physical objects, like Carrie can. They are invisible to normal cameras and ordinary people, but a magic camera can detect them. 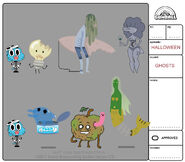 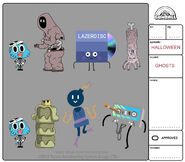 Retrieved from "https://theamazingworldofgumball.fandom.com/wiki/Ghosts?oldid=586886"
Community content is available under CC-BY-SA unless otherwise noted.