Cartoon Network Universe: FusionFall was an MMORPG (Massive Multiplayer Online Role-Playing Game) in which players could enter the Cartoon Network Universe as an original character in the fight against Fuse and his army of Fusions. The game was announced in mid-2007 and set for release in the summer of 2008, but was delayed until January 14th, 2009, and its servers were shut down on August 29th, 2013. The game features elements and characters from many Cartoon Network original series, redesigned in an anime-like style by Midori Foo.

Although they were both Nanos, Gumball and Darwin did not become NPCs in the game, probably due to the fact that (according to the FusionFall art designer) it is harder to make animal NPCs than humans, explaining why a character like Lazlo from Camp Lazlo is not in the game.

Requirement: Level 4 and above; enter the code "ffcmisadventurer"

Requirement: Level 4 and above; enter the code "ffcfunnygoldfish"

Dodge or Dare (Run - Group) - Let Darwin show you his approach to survival. Run away!

Hide (Sneak - Group) - If you can't run, Darwin can always help you hide.

Trauma Therapy (Health - Group) - If running and hiding didn't work, it might be time for trauma therapy. 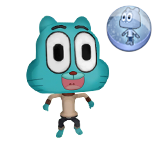 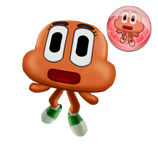 Player acquiring Darwin nano
Add a photo to this gallery

"Gumball Watterson, at your service."
"Gumball here."
"It's me, Gumball."

When low on HP

When hit by corruption

"I could think scientifically."
"Trauma therapy!"
"Are you okay?"

When low on HP

Retrieved from "https://theamazingworldofgumball.fandom.com/wiki/FusionFall?oldid=543646"
Community content is available under CC-BY-SA unless otherwise noted.