Start a Wiki
Formula Cartoon is an MMORG (Massive-Multiplayer Online Racing Game) made by Cartoon Network. It is currently released in off beta phase.

Gumball is challengeable in three ways. It is either solo with him in Gumball the Great, with Johnny Test and Mordecai in Just For Laughs, or with Finn and Mordecai in Ice to Meet You.

There is also a Gumball track as well: Elmore Expressway, which is currently the hardest track course in the game. 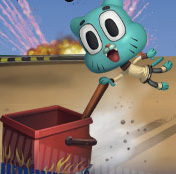 Gumball: Landing boosts are awesome! I, Gumball Watterson, will show you how it's done. When you're in the air, let go of the gas. Then, right when you land, slam the gas, and you'll take off like a rocket!

Darwin: Time to get down and dirty! With some mud terrain, that is. Mud can slow you down a lot. But you can use better wheels and various speed boosts to reduce the effects of various types of terrain.

When Gumball is leading:

Gumball: Do I look old? Tell me the truth!
Gumball: we went to Adventure
Gumball: Check these muscles!
Gumball: One step closer to the fame and fortune!
Gumball: HoHoHoHoHoHoHo~~
Gumball: They call me Romeo back in the days.

When Gumball is losing:

Gumball: I'm glad to see you are happy, but that will end soon.
Gumball: Ah ha! Time for me to catch up!
Gumball: I think my time has passed.

Retrieved from "https://theamazingworldofgumball.fandom.com/wiki/Formula_Cartoon?oldid=551104"
Community content is available under CC-BY-SA unless otherwise noted.