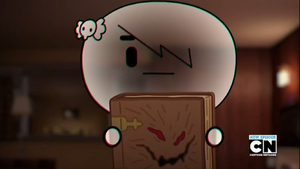 The Forbidden Book is a document in The Amazing World of Gumball. It plays a crucial role in "The Mirror," where it reveals how to break the curse of the Snatcher, and contains useful spells, including one that allowed the group to advance the time to the following morning (albeit with a price).

This book also has a spell to give mortals the ability to touch ghosts, at the price of living a lonely existence inside mirrors.

Retrieved from "https://theamazingworldofgumball.fandom.com/wiki/Forbidden_Book?oldid=545797"
Community content is available under CC-BY-SA unless otherwise noted.