The early reel episode of The Amazing World of Gumball was never aired on TV. It was produced in 2008 and was uploaded on YouTube by Ben Bocquelet on January 18th, 2013.

Gumball and Darwin build a Rube Goldberg machine in an attempt to escape from school.

The early reel begins with a wide shot of the schoolyard of Elmore Junior High, with several students (and Miss Simian) present. Gumball and Darwin are shown at the edge of the area. Gumball explains to Darwin that today they are going to break out of school, and shows him a simplified version of their plan, which is, even post-simplification, extremely long and complex. The boys mount a see-saw, and Gumball asks his brother if he is ready. Darwin is still unclear on what they are doing, but Gumball executes the plan regardless. He flings a steak at Tina, who lunges at it. A string tied to her tail and a roundabout is pulled in the process, spinning the roundabout rapidly enough to launch Carmen, who was standing on it. She collides with and pops Alan, who is being kissed by Masami. Masami bursts into tears, raining on Leslie, who sprays pollen over Rocky, making him sneeze. This blows the petals off Leslie and propels Teri into the girls' bathroom. The girls within scream and throw him into a nearby garbage can, which weighs a pair of scissors down enough for them to cut through the web of Ocho, making him fall onto a trampoline which launches him at Banana Joe, who is on a swingset.

Joe is sent flying upwards, landing unscathed soon after. He is excited to be unhurt, but is soon stepped on by Hector, making the giant stumble back and step onto the Watterson brothers' see-saw. This launches them, but not out of the school— onto Hector's buttocks. As an injured Joe laughs, Gumball points out that it could have gone worse. However, when Hector's buttocks squeeze together and make the boys kiss, they both cry out in disgust. After this, the title— "Gumball"— is shown over a background of the sky, as what would become the final notes of the opening theme of the final show play, ending the reel. 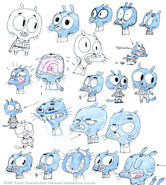 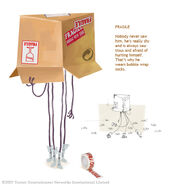 [Almost the entire class and Rocky are in the playground, Gumball and Darwin are near the fence]

Gumball: Okay, buddy, today's the day we break outta school. [Their plan is written on the ground] As you can see, I've simplified the plan. It is now foolproof! And you know what to do, right?
Darwin: Right!
Gumball: Ready?
Darwin: Ready! Err... Ready for what?
Gumball: [Sighs] Never mind. [Whistles] Hey, T-Rex! [Throws a steak; Tina goes for it]

[Tina pulls on a rope tied to a merry-go-round that Carmen is on, causing it to go so fast that Carmen flies off, hitting and popping Alan, who Masami is about to kiss, making her cry on Leslie, making Rocky sneeze, which blows Teri into the girl's bathroom, making the girls scream and throw him into a wastebasket outside. The weight then causes the basket to be weighted down, which uses scissors to cut Ocho's web, who then jumps accidentally, onto a trampoline, shooting him right into Banana Joe, who falls off the swing]

Banana Joe: [after falling on the floor] I'm okay, I'm okay! [Hector steps on him, causing him to slip backwards]
Gumball: Get ready to taste freedom!

[Hector lands on the end of the catapult]

[They are catapulted, but they crash onto Hector's butt. Banana Joe laughs at them]

Retrieved from "https://theamazingworldofgumball.fandom.com/wiki/Early_reel?oldid=552598"
Community content is available under CC-BY-SA unless otherwise noted.