Doppelgänger is a fictional video game, based on Street Fighter, first shown in the arcade in the episode "The Name." 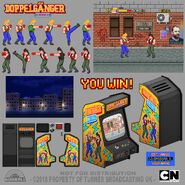 Retrieved from "https://theamazingworldofgumball.fandom.com/wiki/Doppelg%C3%A4nger?oldid=557452"
Community content is available under CC-BY-SA unless otherwise noted.