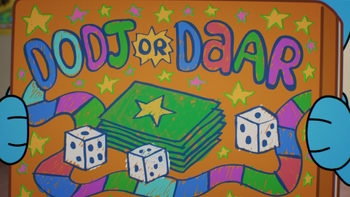 Dodge or Dare, spelled Dodj or Daar in "The Game," is a recurring board game in The Amazing World of Gumball.

The game was invented by Gumball and Darwin. They have been shown playing it on many occasions throughout the series, often with disastrous results. In many flashbacks, Nicole recalled the boys making a huge mess whenever the game was played.

Eventually, they realized that despite how fun the game was, it was too destructive— it had the power to bend space and time to force its players to follow the rules. For example, if a card says that the floor is red hot lava, the floor will indeed feel like red hot lava, burning the feet of whichever player was unfortunate enough to have drawn said card. For this reason, the boys hid their creation under their bed, where it sat amongst a bunch of other trash the boys had stored there.

One day, while Nicole was cleaning their room, she found it. Gumball immediately shoved it in the trash bag with the other garbage, but Nicole fished it out to play with Richard and Anais. Unfortunately, they did not see the threat the game posed until after they were in too deep, having each been plagued by at least one "dodj" card. Nicole, unwilling to believe a simple board game had the power to ruin their lives so completely, put the game away, thinking that the dodj cards would wear off eventually. They did not, forcing the Wattersons to play the game through to the end to get rid of their plagues. Eventually, they finish the game, and the curses wear off.

It is presumed that after the events of "The Game," the Wattersons destroyed the board game, much like how Gumball destroyed his lucky helmet. Despite this, it can be seen in the Wattersons' basement in "The Nobody," when Gumball's flashlight briefly shines on it.

Dodj or Daar is a simple game revolving around traveling the board from start to finish.

Movement is accomplished by completing challenges on "daar" cards. Each player's turn begins with them rolling the dice and drawing a "daar" card. In order to move forward the number of spaces shown on the dice, the player must complete the challenge listed on the drawn card. Failing or refusing to do so results in moving half the number of spaces shown on the dice and a "dodj" card, which creates a random effect on the players or the environment, until the end of the game.

There are five types of spaces.

Retrieved from "https://theamazingworldofgumball.fandom.com/wiki/Dodj_or_Daar?oldid=568917"
Community content is available under CC-BY-SA unless otherwise noted.