"Teachers" is the sixth and final episode of Darwin's Yearbook.

When Darwin asks his friends which teacher deserves to be on the yearbook cover, they struggle to find a single worthy candidate![1] 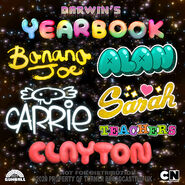 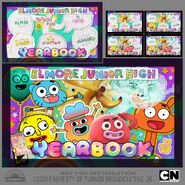 [The episode begins with Darwin connecting on his laptop as usual]

[Banana Joe posts a clip of him flossing from "The Inquisition"]

Carrie: [texting] Seriously, you're gonna put a teacher in it?
Darwin: [texting] Yep, mainly because I can't face another argument about which of you guys it should be.
Masami: [Disappointed, texting] So... what? I'M NOT IN IT?!

Gumball: Dude, you have to see this. [Chuckles]

[They start looking at photos of Principal Brown, and they both laugh. After a while, Gumball puts the photos down and sees Principal Brown posing in the same manner as he is in the last photo and Ms. Simian in front of them. They quickly put back the photos, and Miss Simian sees them]

Lucy Simian: Ooooh! [The scene stops]
Felix: [texting] But it takes more than being photogenic to make a good Principal. I mean, is he even that clever? [Erroneously types another "he" before "is"]

[Cut to Miss Simian's classroom, where Gumball and Darwin standing in. Principal Brown walks in, which is the scene in "The Wish"]

[Cut to the Wattersons' house front door. The door is knocked on, Gumball and Darwin answers by open the door]

[It reveals to be Principal Brown, dress like a medieval hunter, as seen in "The Intelligence"]

Nigel Brown: Good morrow, sweet imp!
Gumball: [angry] Do you have any idea what time it is?!
Nigel Brown: I know not, for my time wheel has stopped at a half-moon hence. [quietly] Also my watch is broken. We can no longer summon sustenance from the telephone, so we are assembling this day a hunting party of equipped and noble fellows. [He moves aside. Harold and Jeff, also dressed like medieval hunters, are on their front porch]
Harold​​: I have my whisk!
Jeff: And I, my kitchen towel!
Nigel Brown: I too have kitchen towel. No beast shall slip through our fingers!
Darwin: Um, no offense, but it doesn't look like you guys know what you're doing.
Nigel Brown: You speaketh the truth, sweet spurs of the waters. We shall almost certainly perish! We lost three good men on the way here.
Harold​​: [whispers to Brown] I got a splinter.
Nigel Brown: And Mr. Wilson got a splinter. But ho! Will you join us this day?
Gumball: Yeah, we'll pass. Looks like you guys are having enough fun combining cosplay and concussion without us.
Nigel Brown: Ha ha ha ha ha! I like you, sweet imp.
Harold​​: I too like you!
Jeff: I too have kitchen towel!
Nigel Brown: We've done that bit. [The scene stops]
Tobias​​​​​​​​​: [texting] I don't get it.
Darwin: [texting] Yeah, it was a weird day.
Tobias​​​​​​​​​​​​​​​​​​​​​​​​​​​​: [texting] No, I mean what's impressive about him talking old-fashioned? He is old!
Billy: [texting] Au contraire! Principal Brown is, how do you put it, "mighty cool and down with the children".

[Cut to the school cafeteria, where Principal Brown walking in, dress in a hip-hop outfit and bling, shown in "The Fraud"]

[Darwin clicks on a video. It's Mr. Small's "The Small Hours" album of songs in "The Singing"]

[Clicks on another video. The video begins with the title, a view of the sky and a sitar strumming. It has been seen in "The Upload". Mr. Small is shown sitting in a grassy field with a boombox and a CD]

Mister Small​​​​​​​​​​​​​​​​​​​​​​​: Welcome to "A Little Moment of Calm," with me -- Mr. Small. Oh I really should have called this "Small Moment of Calm." Anyway, un-clench your chakras, and I'll demonstrate using my new CD, now available in gas stations and supermarkets...in the bargain bin. [Mr. Small plays the CD already in the boombox and begins to meditate]

Darwin: [texting] You know that's pretty much how all of his therapy sessions end.

[A cloud of dust rushes forward, blowing through everything in its path. It's Mr. Small, zooming towards them like a bullet. He dives up and lands right in between them. This is a scene from "The Silence"]

[Cut to a scene from "The Allergy," when Darwin is pinned all over his body]

Darwin: I can't feel pain, or anything from the neck down.

[Cut to Darwin splashes water on Mr. Small and smashes a mirror right in front of Banana Joe — a scene from "The Banana"]

Retrieved from "https://theamazingworldofgumball.fandom.com/wiki/Darwin%27s_Yearbook:_Teachers?oldid=568939"
Community content is available under CC-BY-SA unless otherwise noted.