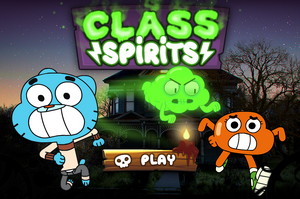 Class Spirits is the sixth game based on The Amazing World of Gumball from the United States. It was released on March 18, 2013.

The game's story is based on the plot of "The Flower," with a few twists for the sake of gameplay. Leslie has begun hanging out with Penny, making Gumball jealous. His jealousy took the form of a malevolent spirit, bent on possessing people and revealing their deepest desires, and forcing them to achieve said desires in malicious ways. Gumball, armed with a jug of salt, which is a ghost's bane, must trap the spirit with salt lines to prevent it from spreading its curse.

When Penny started hanging out with Leslie, Gumball got crazy jealous. Now his jealous spirit is on the loose. Trap the spirit before it infects the entire school!

The goal of the game is to trap Jealousy into a small enough area such that the salt overwhelms and exorcises him. To do so, Gumball (controlled by the player) must make lines of salt on the ground. This is done by simply moving - Gumball will automatically leave a trail of salt wherever he walks.

Initially, Jealousy is boxed into a semi-large box. Gumball is free to move around the sides without fear of getting touched by Jealousy. Once he enters the center, he must reach another side, completing a salt line and trapping the spirit into an even smaller area. Movement while making a line is relatively unrestricted with one exception: Gumball is unable to move backwards, likely to avoid the possibility of leaving unfinished lines in the center. The player must keep making lines until the area becomes low enough for Jealousy to get exorcised.

The player starts out with three extra lives. These lives may be lost in three ways:

In all of these cases, Gumball will get possessed, and the player will lose one life. Once the last extra life has been used, the game will end.

In later levels, there will be holes in the ground, denying passage to both Carrie and Leslie, and Gumball. Jealousy may still float over these holes like normal.

There are also several powerups scattered across the floor. These either buff the players or debuff the enemies, though their effects are short lived. They are:

NOTE: Badges can be earned on the Cartoon Network website in the United States only, and players must be logged in with their account in order to claim their badges.

Finish Line - Beat a level with a single move.

Exor Credit - Complete a level with more than 85% cleared

Charmed And Dangerous - Collect 20 multipliers in a single game.

Retrieved from "https://theamazingworldofgumball.fandom.com/wiki/Class_Spirits?oldid=526655"
Community content is available under CC-BY-SA unless otherwise noted.