Cartoon Network: Battle Crashers is a console and handheld video game exclusive for the Playstation 4, Xbox One, Nintendo 3DS, and the Nintendo Switch. It is developed by Cartoon Network Games, GameMill Entertainment, and Magic Pockets. It was released on November 8th, 2016.

When Uncle Grandpa accidentally drives the UG-RV through multiple dimensions, he picks up some surprise passengers in the form of Gumball, Steven Universe, Finn, Mordecai and Clarence! Now they'll have to band together to defeat the evil shard creatures and set things right. 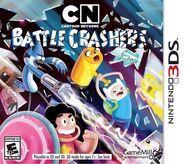 Cartoon Network: Battle Crashers has received overall abysmal reviews, getting only a score of 21/100 on its Metacritic page.

Retrieved from "https://theamazingworldofgumball.fandom.com/wiki/Cartoon_Network:_Battle_Crashers?oldid=551107"
Community content is available under CC-BY-SA unless otherwise noted.