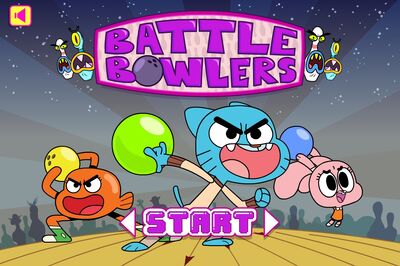 Battle Bowlers is an online game on the Cartoon Network website based on The Amazing World of Gumball. It was released on January 5th, 2015.

The object of the game is to knock down all the mutant pins with the bowling ball. The game plays in the style of an arcade shooter. There is one screen in which the player moves around in as pins of varying size and strength approach from every angle.

The player moves around using the WASD keys, and switches characters using the number keys, with one being Anais, two being Gumball, and three being Darwin. Each character has two attacks, each of which behave in identical ways.

The main attack is throwing the bowling ball in the direction the mouse is pointing, accomplished by clicking the mouse. When the bowling ball is thrown, the player must retreive it in order to throw it again. The bowling ball, when thrown, rebounds off the edges of the screen, allowing the player to take out multiple enemies with one throw by angling throws correctly.

If a mutant pin touches the character, they will lose one heart. Losing all hearts results in a loss. However, the player may repeat the level an unlimited number of times.

The enemies may sometimes drop powerups:

The player may have multiple powerups active at once. For example, having Multi-ball and Mega-ball active would give the player the ability to shoot three large balls in a cone.

Retrieved from "https://theamazingworldofgumball.fandom.com/wiki/Battle_Bowlers?oldid=568728"
Community content is available under CC-BY-SA unless otherwise noted.