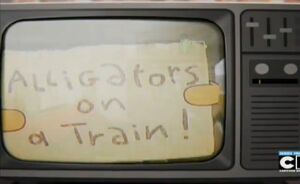 Alligators on a Train is a movie in The Amazing World of Gumball that appeared in "The DVD." Nicole rented the movie from Laser Video for Gumball to watch at home.

The original DVD was destroyed after Gumball mistakenly scratches the disc with the wrong side of a scrubby sponge after Darwin tries to use it as a pizza cutter. In the resulting panic at his realization, it was accidentally thrown into the kitchen sink and shredded by the garbage disposal to a point of no return. To hide their misdeed and return the DVD to Laser Video, Gumball and Darwin create a home-made version using cardboard cut-outs and listing their names exclusively on the credits, but it fails to trick Larry.

Transcript of Gumball and Darwin's Version

[Darwin holds up a piece of cardboard with "Alligators on a Train!" written on it; made-up music plays in the background]

Gumball: [using a slightly high-pitched voice] Thank you so much for saving us from all the alligators on this train.

"OH NO! There's alligators on this train!"

The fake make-out scene in the movie.

Retrieved from "https://theamazingworldofgumball.fandom.com/wiki/Alligators_on_a_Train?oldid=532232"
Community content is available under CC-BY-SA unless otherwise noted.