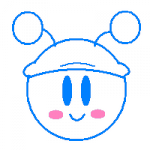 MurumoKirby360 is a username in http://www.deviantart.com/ was registering beginning since November 12,2008 to present.

Spot is my Chowder OC.He's a PUPPY-CAT Thing (Pupcat). His Apperance: Spot is a fitty child who wears a light blue clothes (his shirt is similar as Chowder's purple shirt) and his blue turbo sneaker shoes, that he can run FAST without rang out a fuel/ battery.His shoes has a endless fuel! His dream is to become a "BEST DRIVER IN THE WHOLE WORLD" just like the rest of them, so he decided to drive hard! His hobbies is collecting toy cars (even he likes to collect robots like Gundams, Macross,etc...),he's fully interest in racing games (like Gran Turismo, Need For Speed,etc)(even he also he likes mecha games a lot!), watching some racing sports,games,etc.... And among other stuff..

Spot has many cars that he want in every racing game series.The name "SPOT" was came out from the name car of Subaru Impreza WRX STi Spec C limited (GD Type II)'04 from Wangan Midnight Maximum Tune 3 DX+, his current orginality car.

Since September 20,2013 I've just create my 2nd Chowder OC and her name is Riya.

Riya is Spot's twin sister who always interest at cars (and mechas,too...), she always fit that she can do flips,exhibitions, and also sometimes do a little stunts. She also braves in racing even she's good at drifting like Spot. Like her twin brother, she loves soft and comfortable stuffs that she always hug it, even she hugged her twin brother (Spot). Not only she's cute and adorable, but also she's very helpful too through her friends and Spot.

Update: My POCO- tuning card will be renamed RIYA♥ in a Wangan Midnight Maximum Tune 4 soon...

By Oct. 23,2013, POCO- was renamed to RIYA in Wangan Midnight Maximum 4, but the colors and other needs are really required: Light Blue and pink stripes, also they need some more customs, except Aero set.

My favorite Cars in all Gran Turismo series:

Cuteness Defender is a cartoon and mecha crossover.It was discovered since 2007 when from the characters of Mirmo! and from the mechas of Gundam SEED Destiny.Sometimes I've create myself a Gundam before I've create some cutness mechas.Cuteness Defender was also close similar word from "SUPER DEFORM" or SD for short from the Gundam series [1]. But unlike SD, Cuteness Defender are half human/animal/fiend half mecha. Not only there cute but there tuff thanks to their mecha form.

Originally was called "THE CUTENESS (Number)" since 2008. I was created the Cuteness team called "THE CUTENESS 4(FOUR)". The 4 members are I-Murumo (from Mirmo!), II-Mirmo (from also MirmO!), III- Pocoyo (From Pocoyo) and IV- Kirby (from Kirby). Originally i've draw a concept for the Cuteness Four, and it turns out a very nice, but it's not my official as my result(http://murumokirby360.deviantart.com/art/Cuteness-ACE-3-the-final-retro-137958503). Freedom Gundam (MS Gundam SEED) is Murumo's first armor cuteness.By far it used from 2008-2010. Since 2009, I've try to find another cuteness and figure it out to become "THE CUTENESS FIVE" (In the first place), but it turns out, I've decided to cancelled and find for another year. On July 5,2010, Pocoyo has now 2 Heroine Gundams is the Wing Gundam Zero (TV version) (New Mobile Report Gundam Wing) and RX-0 Unicorn Gundam (Mobile Suit Gundam Unicorn), among with Kirby, he also has two, Gundam Epyon (New Mobile Report Gundam Wing) and Sinanju (Mobile Suit Gundam Unicorn).By Since July 2010, Chowder (from Chowder on Cartoon Network) is join the Cuteness crew and became a replacement for Mirmo (except Murumo because it's still my favorite on the line, and although Chowder show will be finally cancelled since August 2010 due to rang out of budget for C.H. Greenblatt, the creator of GUmball), also the first time that I choose a fursona character from Cartoon Network. Once I've draw Chowder and his first mecha armor (w/ Panini my 1st female fursona http://murumokirby360.deviantart.com/art/SPEARHEADS-Chowder-and-Panini-172918321 by since 7/27/2010, although I've decided it's not official armor cuteness mecha. By 9/8/2010,I've just found his perfect cuteness armor mecha and that's the Legend Gundam from MS Gundam SEED Destiny. And "THE NEW CUTENESS FOUR" has just revealed since 12/3/10. Since 7/3/2011, another fursona that I've just added, Gumball Watterson (from The Amazing World Of Gumball) has just added to the Cuteness crew (http://murumokirby360.deviantart.com/art/My-fifth-Cuteness-Gumball-216368360) and became "THE CUTENESS FIVE", which I drew it the whole member since 7/8/11 (http://murumokirby360.deviantart.com/art/THE-NEW-CUTENESS-FIVE-217249377).